Briefly, for newcomers: Catherine Cookson wrote some hysterically funny romance-y novels back in the day. For some reason, from about 1994 through 1998, the BBC went CRAZY for them and adapted about a hundred and eighty of them into miniseries. From time to time, I like to recap them, because they’re hilarious. You can find a primer here, or catch up with them here.

This week, I run you through The Gambling Man, starring Robson Green.

Here’s the thing, for those of you not familiar with British TV: of COURSE this is starring Robson Green. EVERYTHING stars Robson Green. British TV is purposely scheduled so that something with Robson Green in it is airing 24/7, in case aliens are monitoring broadcasts for someone who looks very serious and capable with whom they can make first contact. He got his own show about extreme fishing. If you investigate the history of England, there are cave paintings of Robson Green. Next year they’re putting him on the five-pound note. There’s no rhyme or reason to it; there’s only love and casting.

In case you think I’m joking, he’s playing a nineteen-year-old in this movie. Does that make any logical sense? No, it doesn’t. But it aired on British TV, so they were contractually obligated to cast Robson Green and by God, they did.

So, this is Rory, played by Robson Green (Wire in the Blood).

This is someone who wandered onto the set and recognized him; as a UK citizen you’re contractually obligated to kiss him if you see him.

However, she picked the wrong guy to hitch that wagon to, since Robson Green (Touching Evil) is a horrible alcoholic gambler who can hardly hold down his day job as a rent collector and is in deep to a thug-boss for some money.

“Where is the horse and the rider? Where is my five dollars?”

(Robson gambles a LOT in this miniseries. There are whole poker games that feel like they play out in real time. I fast-forwarded many of them. Just know the guy sucks, both FOR playing poker, and AT playing poker.)

To solve his money problem, he turns to his day job, where he works with his friend Expendable, his boss, and the boss’s daughter Charlotte, widely considered to be the world’s ugliest woman. (We’ll get to her later.)

That’s Expendable up front. Right after this, he gets blamed for five pounds going missing from the company safe. (That’s like fifteen litres today!) He gets hauled off to prison, which is very sad for him. Janey, who was friendly with him, is also really sad about it. The only person not sad about it is Robson Green (The Student Prince). However, whenever Janey brings it up, he gives her the bedroom eyes: 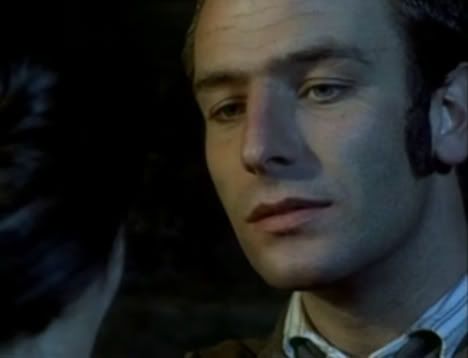 L.L. Cool R. over here is a master of deflection.

There’s tertiary BS for another hour, like Robson’s brother buying a little dock-and-storefront and Theoden not being happy about it and Robson moving in. Then he and Janey get married, and she gets to come live above the dock-store, too! Robson’s brother sleeps in a cubby in the wall. It’s all very Victorian.

Unfortunately, Janey brings up Expendable on their wedding night, at which point he shoves her onto the bed and screams at her (your hero, ladies and gentlemen!), and Janey is creeped out because she doesn’t get why he’s so defensive about it. (Janey is not the sharpest bulb in the chandelier.)

By this time Expendable is out of prison anyway, so it hardly matters, and Robson’s boss has died, so he’s a little busy.

All that buildup just serves to get us to Charlotte, the boss’s daughter who’s taken over the business, and Robson’s poker buddies laugh and laugh at him because now he has to work for the world’s ugliest woman.

Dear casting company: Could you drop me a line sometime? I have some questions about The Gambling Man. Thanks! Love, Genevieve

Anyway, he’s shocked to discover she’s a capable businesswoman (probably because he was so discombobulated all the time by her twisted, revolting features). She promotes him to Manager because he’s well-liked in the company, and things are looking up for him, right up until Thedon’s thugs beat the crap out of him because he owes them money, or because his brother owns a dock, or something. The villains here are not very well sketched out. They mostly want to beat him up because Robson Green takes all the parts.

In the meantime, the light bulb has slowly been invented right over Janey’s head, and she’s like, YOU STOLE THAT MONEY, I CANNOT BELIEVE THIS, I AM GOING TO FRANCE WITH MY EMPLOYER.

Then she drowns. (I am telling you, if you ever find yourself in a Catherine Cookson novel and realize you are someone’s first wife, kick up your heels and enjoy yourself while you can, because you are done for.)

Robson Green (Rocket Man) mourns for a year (two seconds in movie time), and then gets back into the swing, trying to ignore the fact that he’s getting the glad eye from his hag of a boss.

That is one ambivalent nineteen-year-old.

However, she continues to impress him with her intelligence and resourcefulness, and frankly, you catch on about five seconds into this that she is way, way too good for this jerkwad, but you still want her to be happy. Why she is not the focus of this story is totally beyond me.

Regardless, she explains that the marriage would be for business purposes only. She wants companionship and not sex, and he can help her run the business and have his own bedroom and no questions asked, but they might as well marry since they’re already the talk of the town; people figure that if he spends so much time with her she has to be buying his favors, since no one else would have her because she’s, quote, “plain as a barn door.”

Even Robson thinks that last part is sort of bullshit.

(Fun fact: he tries to come clean about stealing the money and blaming someone else, and she’s like, “I know, and it doesn’t matter!” because it’s Robson Greene, and he can do just as he pleases.)

However, she really is the bee’s knees, so after a brief hesitation, he accepts her proposal.

Robson’s family thinks it’s horrible for their son to whore himself out like this.

They don’t understand why he can’t just wash his elbows in the skim milk like everyone else and not get ideas above his station!

But marry Charlotte he does, and on the wedding night, he gives her a little of the ol’ Victorian Lean.

You know a man is serious about his leaning when his hand slides clear out of the frame.

Anyway, he does well at work, is a good brother, is a kind husband, and eventually falls in love with Charlotte which is good because she’s growing a bairnsketball and he doesn’t even gamble that much any more and things are really looking up for him and –

She did, however, have amnesia, which was the two-year delay, but now she’s back and ready to be Robson’s wife! Robson’s like, “…Um.”

To be fair, this is the one time the guy actually has a leg to stand on. She’s like, “You promised in church, until death us do part!” and he’s like, “And it did!” (Awkwaaaard.)

Before any of this can be resolved, though, Cookson must have realized this narrative is going nowhere, because suddenly Theoden and company light Robson’s brother’s dock on fire so everyone has to gather downtown and Cookson can just end this thing.

The house is going up in flames, which is apparently a disaster! (The dock is totally fine and still usable for business.) Janey and Charlotte maybe have to confront one another! (They don’t.) Theoden and his thugs are maybe caught by the law! (This Cookson is not so great for the narrative satisfaction, let’s face it.)

A brief interlude as I pay homage to my favorite thing ever: overacting extras with one really bored one hidden in the crowd.

I hear you, kid in the front, but we have to keep going!

Oh, screw it. Robson Green (Extreme Fishing with Robson Green) goes into that fire to save his brother, roasts to medium rare, and stumbles out just in time to die. YAY!

Charlotte’ really torn up for about five seconds. Then we cut to Seven Years Laterâ„¢, and realize she has a kid, a suddenly-supportive mother-in-law, a mountain of money, and better things on the horizon than Robson.

Finally, a REALLY happy ending in a Cookson!

(Sorry, Robson. I still love you! I’ll talk about Wire in the Blood sometime to make up for all this. )

Ten Things You Should Know About I, Frankenstein

TV Movies and Other Accidental Horrors