Miss Universe! Yes, it’s that time again, when hopeful young ladies gather from all around the world to grin their beautiful hostage grins into the camera, and to be dressed like fools in “National Dress” by horrible pageant planners secretly trying to test what young ladies are willing to wear on camera.

That answer came back: Practically anything.

I have tried to look at this and understand what happened. In the past, this category has been spectacularly awesome (Thailand!) or hilariously fun (the national costume of Iceland is dignity!). This year is what I can only term a Hot Mess, with Intermittent Laughter.

This year also seems to be the year that the always-fantastical undercurrent of this whole glittery mess went from subtext to text:

Tanzania, auditioning for a role in the inevitable Metropolis remake, and/or putting mortal fear into her enemy contestants. Either way, SUCCESS.

However, she had some serious competition in the Science Fiction and Fantasy category.

Under this cut, a bajillion pictures.

Puerto Rico, wearing an amazing dragon hat, which is something I don’t get to say often!

Venezuela, extrapolating what Danerys is going to look like by the end of the books.

Guam went Full Mermaid and I love it.

Romania IS slightly embarrassed to be wearing a Dracula cape!

Guatemala, who had it all going for her until she put the hat on.

Georgia, not realizing how out of her league she was going to be in the Big Skirt category this year. 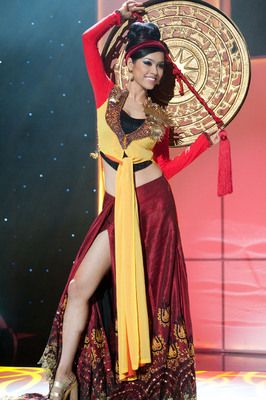 Sri Lanka, looking just as smug as I would be if my outfit was way more comfortable than everyone else’s.

Denmark, in a lovely costume…

That Great Britain maybe should have considered.

France, out of nowhere with an amazing getup!

But the Netherlands is wearing a boat hat. GAME OVER.

Then we start sliding a little downhill. 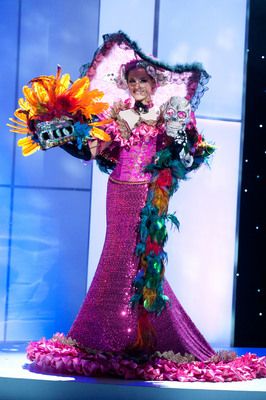 Mexico. “So, is there a LIMIT to what I can wear or carry? Are you sure? Great!”

CHILE. ARE YOU KIDDING ME.

The Cayman Islands get it right: wild and huge, but well-designed.

Meanwhile, someone hates Curacao so, so much.

And a brief craft tutorial: How To Wear Dangle Things From Your Arm Region.

Do: Ecuador, with style, proportion, and attitude.

Don’t: Ireland, peer pressured into stapling some CDs to her gauntlets five minutes before showtime.

You might think Ireland had something to be ashamed of, but let me assure you, this year’s crop of costumes gave her a run for her money. For some reason, there is a large Miss Universe contingent that forgets, every year, that this contest is coming up, and they make their costumes the night before. This year it was elevated to an art form of sucking, to the point that many of them walked the entire stage with an earnest expression of “What the Fuck, Seriously.”

So, let’s examine this, the best of categories.

British Virgin Islands, who can’t even.

Ukraine. (I laughed out loud.)

Hungary. You cannot start the night before, this is what happens.

Honduras, who is not even pretending to care.

Russia, who was hoping no one would notice she forgot her dress as long as she really worked the textiles.

Serbia, the last-minute-applique wonder of the world.

Kosovo, in a moment of awkward self-awareness.

U.S. Virgin Islands thinks that exactly 0% of this is funny.

Sweden. You know your costume’s a mess when the weird part of the outfit is the hat.

Australia, having learned literally nothing since last year.

Korea, who must be kidding me.

And El Salvador, the most magnificent bitchface of them all.

For the technical winner, I think you have to watch the pageant on TV tonight. But let’s face it, the real winner tonight?

Iceland, who had so much dignity her costume isn’t even here. WINNAH, AND STILL CHAMPYEN.

For the rest of the costumed carnage, you can check out the full list here, or head straight to the Trump-stamped source at MissUniverse.com.