The Catherine Cookson Experience: The Girl

So, after last week’s happy-go-lucky tale of nice girls with the memory capacity of a goldfish, we get into the gritty reality of what life was like for the ladies of the 1850s. (Answer: sucky.) Behold, The Girl!

Note: There are Cooksons worse than this, but few Cooksons duller. We will be skipping over large portions of repetitive, depressing malarkey. The point Cookson is trying to make: sucks to be a lady in the 1850s who had to make a good marriage Or Else. Point we take away from it: sucks double to be a lady whose only options are your rapey husband or that dude down the street who gets drunk and insults you. (Also, you fall in love with the second guy, which means in this scenario you probably have a concussion. I’m sorry to hear that.)

Era: 1850
Heroine: Hannah Boyle, the young illegitimate daughter of gentleman Mr. Thornton. OR IS SHE?
Siblings that require looking-after: She has three half-siblings who mostly suck, but in case she’s the one that requires looking after, because oh my lord, girl gets beat on.
Illegitimate (Self or sibling): Hannah. Sort of. Whatever.
Asshole Father?: Uh, not to Hannah, but uh, wow.
Romantic interest(s): Ned. Fred, who marries Hannah, is not a romantic interest. It gets gross. *shudders*
Bairnsketballs: Hannah gets one, though technically it’s legitimate since she’s married. Even though it’s not her husband’s. It’s all very Jerry Springer.
Fistfights: Yep. And caning. And bear traps! And they burn someone’s finger off.
Assaults: Innumerable; we see one, and one other that’s interrupted by one of the best conversations the world has ever known.

We begin in 1850, when a redheaded child runs up to a man on a horse and begs him to help her mother. The girl is The Girl, Hannah Boyle. The man on the horse is Ned, who is supposed to be a hardscrabble farmer type. In reality, he looks like one of the bridge-and-tunnel guys wandering 27th street in their velvet short sleeve mock turtlenecks every Saturday. BT Ned runs to the girl’s aid, but not before stopping and shaking her as he chastises her for not knowing about the hidden bear traps in the woods.

Little does BT Ned know that as he does this, he’s imprinting on her like a mother goose on a squirrel.

When Mom is a little better, she drags Hannah to the Thorntons, a gentleman’s family, tells him Hannah’s his illegitimate kid, hands him a letter Not To Be Opened Until Later, and staggers on down the driveway and out of our lives forever.

Anyone who’s ever read a novel from this era can guess how Mama tells her three little sweethearts (Decent Sister, son Flopsy, and Bitchface) to treat The Girl, to whom Mama herself never speaks. Naturally the servants love Hannah, because she’s so pure that flowers spring up where she walks, but when Decent Sister begins to befriend Hannah, Mama flips her shit faster than Joan Crawford on a gravy stain, and horsewhips her to within an inch of her life.

It’s so uncool that when the dad comes home, he decides to lay down the law about mistreating Hannah (yay!) by horsewhipping his wife (NOT YAY).

Then, brilliantly, he’s like, “So, listen, let’s just repair the relationship by sleeping together.” She’s like, “The HELL is this?” This surprises the crap out of him, since he was all ready to get down and dirty and doesn’t even understand why she wouldn’t be into that as she clutches the bloody remains of her tattered nightdress around herself.

Anyway, Hannah gets sent to school far away, which, let’s face it, is a mercy. I’m sure she’s downtrodden there, too, since that’s pretty much the motif for poor Hannah, but I just can’t bring myself to care.

When she comes back from school to the Big House, she looks like this!

P.S. Of all the 19th-century Cookson heroines, she’s the only one who’s so beautiful for the time period that she looks right in the clothes. I mean, she looks like a cameo. Thumbs up.

P. P.S. Every time jump in a Catherine Cookson movie is SEVEN YEARS LATER. I don’t know why. Just know that in the last seven years she went from redhead to totally brunette.

When she comes back from school, everyone loves her except Bitchface and Mama. Fred the butcher especially loves her. He loves her hardcore. He’s supposed to be stupid, so they cast him a little heavy, which – thanks for that, movie:

And he turns into a rapist, so I don’t even know the statement Cookson is going for here. Thumbs up, Catherine.

Anyway, the dad gets killed by the husband of the lady he’s seeing on the side (duhRAMA!), and BT Ned comes to see Hannah to condole with her. It goes like this (actual quotes):

Ned: What will you do?
Hannah: I don’t know.
Ned: You won’t survive long, will you?
Hannah: I don’t find that very funny, Ned.
Ned: Well then do something about it! You’re not a bairn any more! You’re a young woman, and as dangerous as dynamite in a mine!

So, she shouldn’t work in a mine? What? Stop throwing insult salad, BT Ned!

Anyway, Mama knows what should happen to her. Time to marry Hannah off to the butcher! Of course, as soon as she’s married, the pastor gives her Mom’s letter. In true Cookson style, her ghostly spectre accompanies the letter so we know for sure who wrote this little mash note.

So, to clarify, James Purefoy did not send this letter. Hannah’s mom did.

Also, the letter. In short: “Yeah, Thornton’s not your dad, my husband was. Anyway, good luck with all that!”

Hannah, even though she is married and should probably think about how it would be sort of a deterrent to marrying someone else that same day, runs out of the church and over to Flopsy her half-brother, all, “Now we can get married if you want!”

I’m going out on a limb and guessing no stinkface like that is followed by a marriage proposal. I am right.

Hannah, crushed, runs to Ned’s house, which is an abandoned Arthurian fortress with a barn under it. When he finds her, he’s so wasted that he verbally abuses her (Summary: “Don’t you see how much I love you, you stupid cow?”) until she runs into Bear-Trap National Forest. When he follows her, trying to apologize, he gets a bear trap right in the arm. I cheer!

Luckily, all they have to amputate is one finger. Sadly, it’s the middle finger, which will really impact his ability to tell the other boys from Jersey how he feels when they tell those jokes about his mom.

Hannah returns home to Fred the butcher. He christens her arrival with some marital rape. You know, standard-issue 1850s.

She lives with his overbearing mom and his marital rape for a long time – eighteen hours in viewer years – as we watch her suffer and do hard labor and generally be beatific. (Of Cookson’s heroines, she’s not necessarily the worst, but man, is she the dullest. Stop gently tucking your hair behind your ears and slap someone, girlfriend! Damn!)

But downtrodden as she might be, her passion for men who belittle her can’t be ignored, and she runs right back into BT Ned’s nine grubby fingers. 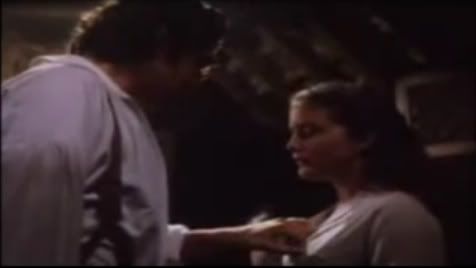 She looks just thrilled, doesn’t she?

This continues (imaginary SEVEN YEARS LATER title card here), until Hannah finds herself pregnant! She tells Fred, hoping it will scare him off marital rape, but Fred only says,
“Oh, come on, it feeds the baby, everyone knows that!”

Dear Actor Who Played Fred: I’m sorry you had to say that out loud. I know you’re sorry, too. Let’s just never talk about it again, okay?

After Fred finds out about BT Ned and beats him almost to death in a Wild World of Nature-style fight over who gets to take Hannah home, it looks like Hannah might have to make some tough decisions and be brave in order to leave Fred! Character development!

Then Fred and his mom get cholera and Fred dies and Hannah finds a huge stash of his mom’s money. So…not so much. Well, that was a fun hope while it lasted.

The movie ends with Hannah kicking out the nasty mother-in-law, leaving the house to her Decent Sister, and going to Ned’s abandoned fortress house, there to be verbally abused for the rest of her days. Awww!

Doesn’t she look like one of those crochet dolls you put over the roll of toilet paper?