Well, the Oscars HAPPENED this year, didn’t they? (They happened to be dreadful.)

There is, of course, a world of nonsense involved when the richest and most elevated echelons of a subculture come together to congratulate themselves; that’s par for the course with most celeb culture. However, even for an event which shut a woman director out of nominations even while nominating the movie for Best Picture (for a picture with some seriously problematic elements – Hollywood, you’re a delight), last night’s show was pretty dismal. I ended up seeing the Hustler-cover-set-to-music intro song; it should be no surprise that I therefore missed the Anti-Semitic teddy bear, and apparently also missed the extremely questionable red carpet tactics of every interviewer who decided not to even pretend to want to begin to learn how to pronounce the name of one of the Best Actress nominees. Banner night, everyone!

However, even when the rest of the night is a quagmire, the show goes on, and from the impassable sea of stylists, makeup artists, hair experts, and extremely concerned and hovering jewelry-security professionals emerged a lineup of women primed to the max.

While for me there was no breakout-amazing look of the night, several looks were stunning, several more were lovely, and eventually we even get to Thunderdome!

Kerry Washington. I love the color, I love the shape, and I love the detail on the bodice, which is pretty flawless for something that could have so easily become Little Nemo Haute Couture. Great dress.

Fan Bingbing, who carries off this amazing Old-Hollywood-Modern ensemble so effortlessly that this looks like a still from a dance number where she’s about to explain to some poor gentleman just how out of his league she is. I approve.

Queen Latifah. A much more understated interpretation of Old Hollywood, but it’s a beautiful dress, marvelously fitted, and accessorized just enough. Love it.

Quvenzhané Wallis. If you don’t think this is great, you are a monster (or Onion staff member, I guess, TOPICAL, also what a bunch of assholes).

Alicia Vikander, making a dress that is the Versailles of blue beads look totally breezy and casual.

Emmaneulle Riva, proving that the idea of “showing off your shape” is an option and not a command for looking awesome (still a thing), in a beautiful deep-teal cloak with a little sparkle.

You’ll note that all of my favorite outfits were rendered in a color (no one is more surprised than I am). But they weren’t he only colors on the red carpet this year!

Jennifer Aniston, because when you’re going to wear a ballgown, wear a Ballgown. 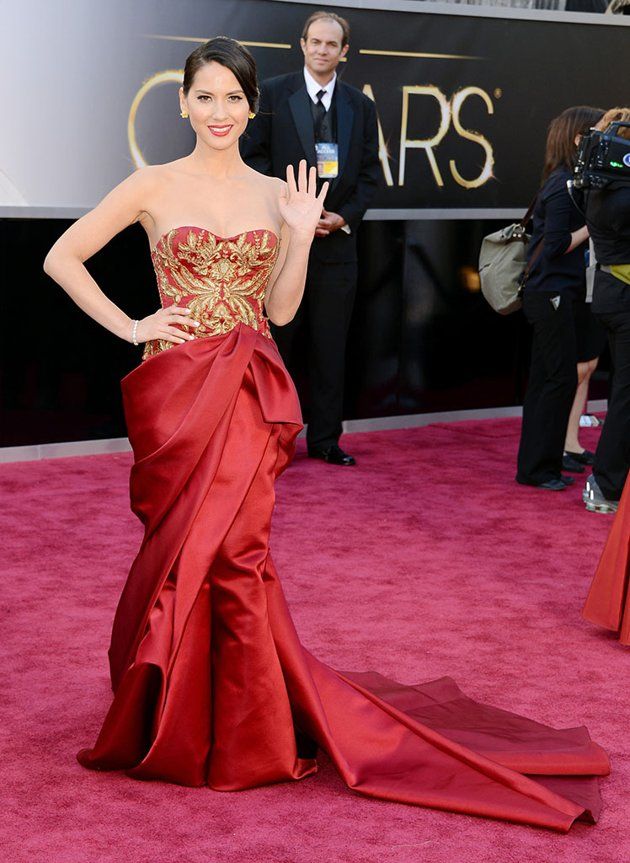 Olivia Munn, who looks unsure of her choice here, but she shouldn’t! It’s a very interesting dress – positively risky, this year. 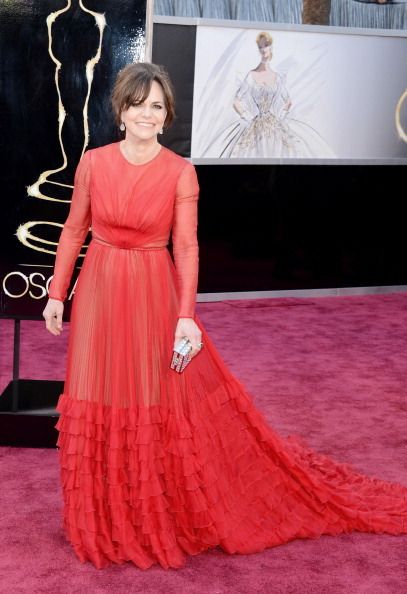 Sally Field, who is looking adorable in this dress; I like the clean, simple lines of the bodice, with a little texture from the Fortuny-esque pleats, and a shot of red. The bottom gets a little Ruffletown, but maybe that’s just a thing we live with.

Jane Fonda, who is rocking acid yellow like she doesn’t even care.

Jennifer Garner, the kindest saloon owner under the sea!

Reese Witherspoon, making a last-minute “Why Not” entry in the Veronica Lake Sweepstakes, in a dress with very effective colorblocking; the black framing really enhances the saturation of the blue. 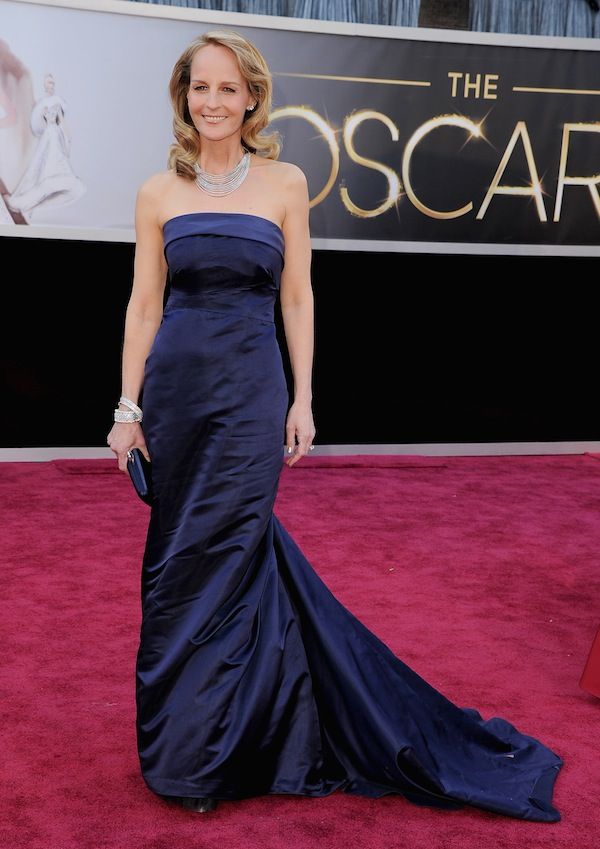 Helen Hunt, in a color I really like, shaped into a dress about which I have no strong feelings, except that some dresses have be Worn, with that ineffable W, in order to look good, and I suspect this is one of those.

Speaking of, let’s travel into:

Zoe Saldana, Wearing this dress to the point that you don’t question its components until you’ve looked at it for a while and can’t quite understand how the futzy on the bodice and the belt and the tiered ombre hemline were meant to cohere. That’s some good Wearing.

Charlize Theron, also Wearing a dress that could look standard and instead looks like a column dress belonging to a painfully chic space princess. (We’ll get there.)

Octavia Spencer, in a dress I mostly love. (The pale peach reads ’80s to me; I think that’s what’s keeping me from loving it like I should.)

Jennifer Lawrence, ditto: love the shape, which is both Holywood throwback and very space-age, and understand the idea of something matte, but pale pink damask is just never going to be a thing that I say, “DEFINITELY make the whole dress out of that one.”

Melissa McCarthy. Love the color, love the neckline, love the embellishment. However, the black mesh inset makes no sense to me, and the ruching on the hips looks like someone did it with a drugstore sewing kit in the car on the way over. On a pale color, you need to make sure your ruching is soundly engineered!

Amanda Seyfried, who looks a little embarrassed about her dress, as if she’s only just realized she agreed to wear a high, tight collar for the next eight hours.

Jessica Chastain, human definition of “beige,” in a dress whose subtle fawn color is actually very nice, though it has to fight her, somehow, in a way I can’t put my finger on, except that in a lot of pictures this dress has given up trying to show off its subtle colors and rosy undertones and just looks like a Chastain flesh suit.

Anne Hathaway, human definition of “aggressively beige,” wearing the same neckline as another lady who won an Oscar that a few years later people realized she shouldn’t have won (Paltroooow!). However, if you’re determined to wear a necklace with a neckine this high, this is a good example of how to do it.

Amy Adams, who used to make interesting red-carpet choices and now is just going to keep doing this until you tell her you love her the darling mostest, I guess. (Love the lady behind her, though; she’s making shit Happen back there.)

Helena Bonham Carter, coming closer to actual darling mostest by wearing a reverse-ombre prom dress and the facial expression of that girl in your class who was going to sneak out of the school dance in literally ten seconds and smoke and play records in the principal’s office and was just about to invite you.

Kristen Stewart, in a dress that could have looked like a garden party or Debutante Ball Under the Sea alongside Jennifer Garner, but actually reminds me of a cross-section slide of bone marrow or something else just edgy enough for Kristen Stewart to agree to wear it. (Bridal overtones are, I suspect, intentional, after last year’s revealing PR disaster that illuminated quite a bit about how Hollywood feels about women who make mistakes; this dress is quietly reassuring people that she’s back in love and all is forgiven. I’ll be interested to see how her style develops over the next year or so.)

Adele, looking both sophisticatedly glam and like she’s about to join Helena for a drink and a smoke at any moment.

(Quick mention here of Daniel Day Lewis and Rebecca Miller, because that navy tux is one of the few men’s outfits I noticed on this entire carpet, and even though she’s not officially playing this game – and professional thespians’ plus-ones shouldn’t be required to – the sharp square neck on that black lace Morticia dress that frames her necklace and creates that nice clean line to the floor is all sublimely stylish.)

But for sublime style, nothing beats some good old-fashioned SF.


On a far-off planet, Cinemandia, where women rule, a grand war shall be held this day!

Salma Hayek wears a gown with neck-circlet designed to draw the eye the physics-defying beehive that marks her a champion of the arena, and possibly to protect her neck in the event of wayward fighting.

Naomi Watts, the brave Captain of the Guard, whose shoulder gauntlet conceals a terrible magical secret! The other shoulder has no secrets. 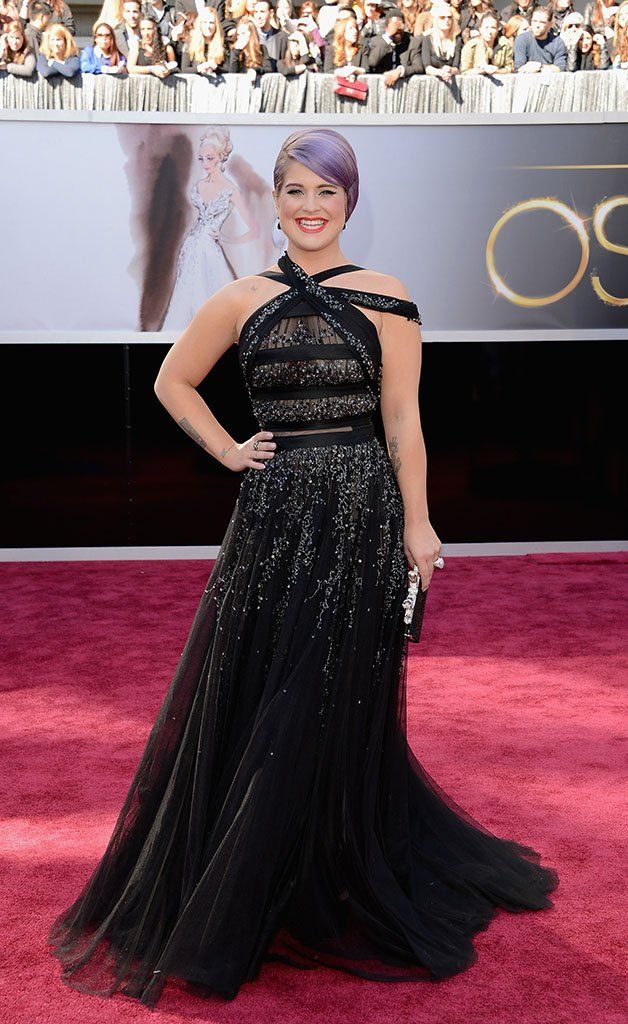 Young but bold, Kelly Osbourne arrives prepared for battle in a dress with fetching straps, studded to deflect any blow!

Like the flappers of Old Earth, Stacy Keilber knows that the best armor is to lash yourself tight with loops of steel beads! Also she knows this armor will look amazing.

But Halle Berry, too, is a forbidable champion of this arena, her armor tempered by battle! The Art Deco of Old Earth is not forgotten!

Naomie Harris doesn’t compete in the ring any more, but the jewels upon her breastplate are a reminder of her days as a gladiator of renown. (The slit in her skirt is a reminder that there is no trend so silly that it can’t be perpetrated on red carpets for at least a year before anyone looks around and realizes everyone looks sort of nonsense in it, including the first person who did it.) 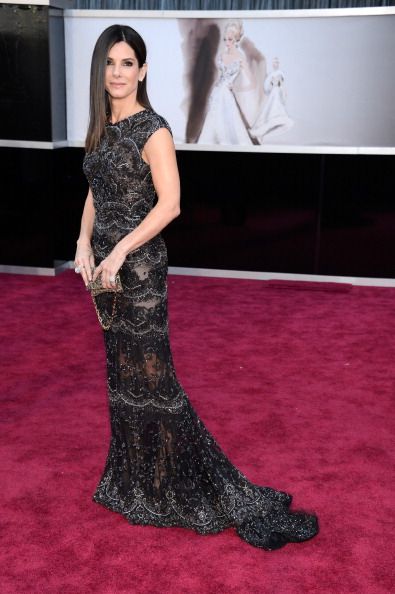 Visiting dignitary Sandra Bullock, whose modest shape yet sparkling demeanor remind you she has the Cinemandia equivalent of a buddy cop movie coming out this summer.

Royal House cousin Nicole Kidman, who can be forgiven for the hem of her otherwise-stunning gown, because people on the planet of Cinemandia haven’t gotten the note yet that you have to be very careful Klimt doesn’t veer into Mars Attacks. It’ll arrive in a few years; she’ll be fine.

Catherine Zeta Jones, Elemental Sorceress whose gown is spun from the rays of the sun itself! As you can see behind her, citizens of Cinemandia cannot look directly upon her.

Kristin Chenowith, Plucky Stand-in Sorceress who used urban nighttime light pollution as the inspiration for her gown. It’s working out!

But none can match Meryl Streep, Grand High Ruler of this planet, whose gown is constructed from the shattered remnants of the armor of all who have tried to oppose her. All hail the Grand High Meryl!

And with that, the highlight of actors’ Red Carpet Season comes to a close. There will be more red carpets this year, but tonight, stylists can sit back and lavender-balm their weary eyes, and designers’ assistants rest from fielding publicists’ phone calls, as gentle twilight falls across the land. (They shall slumber fitfully, however; the Costume Institute is only three months away, and oh, there shall be such a call then!)

More pictures at Yahoo!OMG, from whence these pictures come.