Last night was one of the few nights a year when a hundred stylists earn their wings making pretty ladies fight to the death in uncomfortable dresses. Strangely, while most red carpets can be separated into large swathes of “Decent” and “Appalling,” this year everyone seemed to be pulling from the same rack of slightly-tasteful outfits, so the theme of this year’s red carpet ended up being, “Yeah, Okay, Sure.”

Let’s check out the sartorial wonderment, shall we?

First, let’s get this out of the way. Every year the red carpet has two or three colors that are named in some smoky backroom as This Year’s Colors. Well more than half the ladies of the red carpet will then appear in exactly those colors, standing awkwardly beside one another, desperately hoping that they’ll be the person who wins the Greige Division, but under such strict orders not to sweat that the stress can only be released by drinking copiously the moment they’re inside. This is why I imagine the Golden Globes to be the most fun of the awards.

This year’s Colors are Greige, Pink, and Green.

Milla Jovovich, realizing she’s outnumbered in this division but working the shit out of her dress anyway.

Leighton Meester, who has the entire Gossip Girl closet at her disposal, plus sixteen seasons of promo stills for reference as to what looks good and what doesn’t, and still thinks that this is her best possible option.

Megan Fox, who ages 7 years for every month she’s out of the public eye. 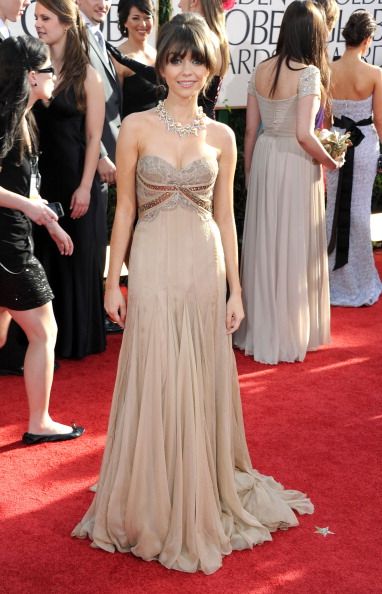 Scarlett Johansson, in a dress that was almost nice but somehow looks like a boudoir robe from a Mae West flick.

Sandra Bullock, whose hairstylist was apparently angry with her.

Kelly MacDonald, who looks lovely, even though her dress gave up the ghost so early that it was shredding itself to death behind her as she walked down the carpet.

Hailee Steinfeld, who looks delightful, in every sense of the word. (And I know this is whiter than the rest, but somehow I couldn’t bring myself to actually make any of those other dresses a winner.)

Natalie Portman, who MUST be joking.

Julianne Moore, whose dress I don’t actually like, but it makes a statement and I like that she’s willing to wear it, so, points.

They all looked good, so we’ll make this quick.

Angelina Jolie, Elisabeth Moss, Catherine Zeta-Jones, who always dresses like it’s 1955 and for which I applaud her.

Mila Kunis. Her acting, while serviceable, has never thrilled me, but she always knows how to wear clothes on a red carpet, somehow.

And now, a rundown of some other standouts, good and bad:

Christina Aguilera, looking just about how she’ll be remembered, I guess.

In fact, let’s run down my favorite micro-trend this year: Awesome People in Glasses. See also:

Tina Fey, whose dress I actually liked a lot, despite her lack of glasses.

Michelle Williams, doing a Whimsical Nymph impression that does not work because she is so, so much better than this. You wore The Mustard Dress, Michelle — I know you can be more than this!

Olivia Wilde, dialing the glam up to 12.5 in an attempt to move away from Tron promotion. 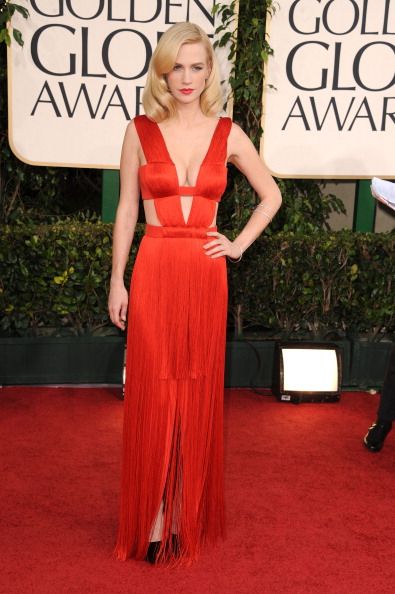 January Jones, who has to be messing with us. I just…can’t.

All right, let’s wrap this up with some favorites.

Helena Bonham Carter, whose dress is beautiful in that particular Vivienne Westwood way. I wish she had picked either a slightly bluer right shoe, or two shoes that were completely unrelated to the dress colors. Otherwise, you go, Helena.

Tilda Swinton, because come on.

Jennifer Lawrence, who broke my heart with that awful mullet hem and those nonsense shoes, but who was perfectly styled otherwise, and I love the wide straps so much that I’m willing to just cover the bottom half of this picture and pretend.

And for once, my favorite actress of the night in a dress I can actually be proud of:

Ever since Young Riders (and Homicide, which was better but came after Young Riders), you have been one of my favorite actresses. Please know that I loved seeing you in this bangin’ sequin dress, but please also know that whatever you are wearing, every time I see you on a red carpet I will be proud to bursting.