Here we are, at the close of the awards season, in which stylists, designers, managers, PR assistants, and actors perform a complicated series of communiques about style and photography and interior trussing, like the intricate dancing of bees, and as mysterious and inexplicable to those of us who can only look at the end result and marvel that, because of mixed metaphors, some of our finest actors have pollinated this season’s crops.

Also, they wore dresses, and though in general the level of success was high, Bafflement is still waiting around every corner, covered in chiffon and ready to strike.

Outfit of the Night: Whatever Tilda Swinton was wearing at home.

Actual Red-Carpet Outfit of the Night:

Anne-Sophie Bion, editor of The Artist, because she said, “You know, people always say that I could wear a garbage bag and look good, and I feel there’s no better testing ground for that than the red carpet of the Academy Awards, so I am just going to get a really long garbage bag, Project Runway it with a couple of safety pins, and see if I get away with it.”

Traditional fabric-dress wearers under the cut.

At this point, the year’s trends have come and gone so fast that, in an attempt to avoid the several-yellow-dresses-at-the-Golden-Globes incident, none of the actresses this year dared to wear it at all, which is a pretty speedy turnaround. In the light of the bonfire of a dozen yellow dresses who died for the sins of their fellows, the only way to sort out this group is just to judge the crap out of them, head-on.

Li Bingbing, in a white dress with enough fit and texture that it doesn’t look bridal.

Meryl Streep, who has stopped even pretending that she’s not going to win whatever she shows up for, and so just came dressed as an Oscar to save time.

Rose Byrne, who won the incredibly specific Black Sequin Dress and Bob Haircut Division. However, I hope this look on her face was momentary disdain for someone terrible who just walked behind the camera, and not the early warning signs of Actress Face Freeze. 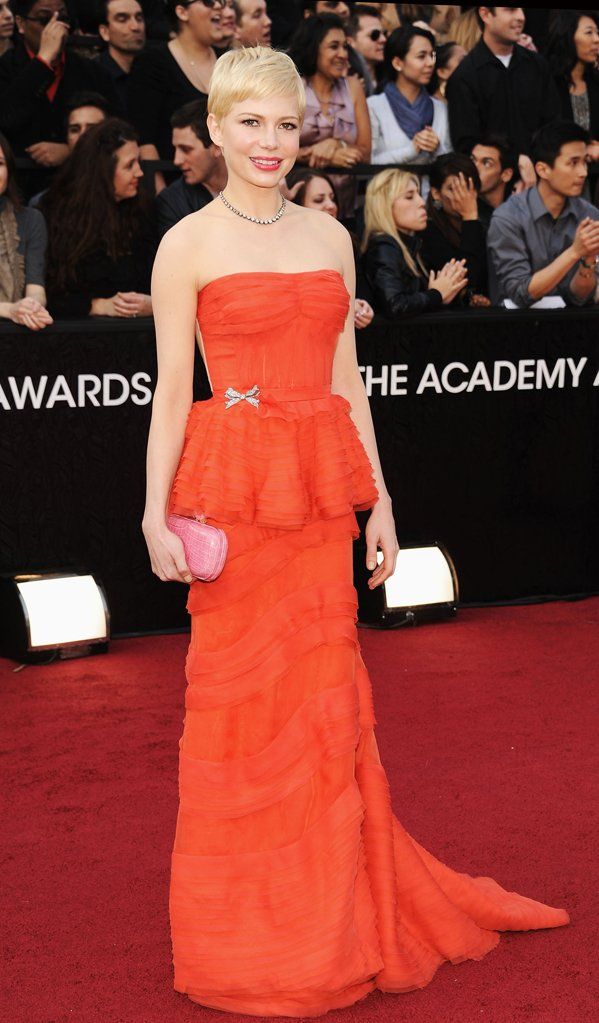 Michelle Williams, in a dress with great texture, and we just won’t talk about the strap holding up her dress in in back, made of elastic and optimism.

Jessica Chastain. This is a dress I don’t think her presence can cash (this is a Cate Blanchett dress), but there is no denying that this McQueen number is a fuckin’ DRESS.

Maya Rudolph. The back of this bodice was all this pearl-encrusted lace business we get a glimpse of here, and the color looks great on her.

Julia Ormond. She looks terrified, but there’s no need; the dress is understated, which is just about right for her at this event, and I even dig the curls (so SHINY); if she had pulled her hair back a little so we could have gotten a better look at the earrings, it’s all I could ask.

Lea Thompson. I think this is actually really cute. And if you’re going to bring a wrap, Bring a Wrap, you know?

Kelly Osbourne. The lipstick makes the hair look a skosh Katy Perry, Otherwise, this is awesome. 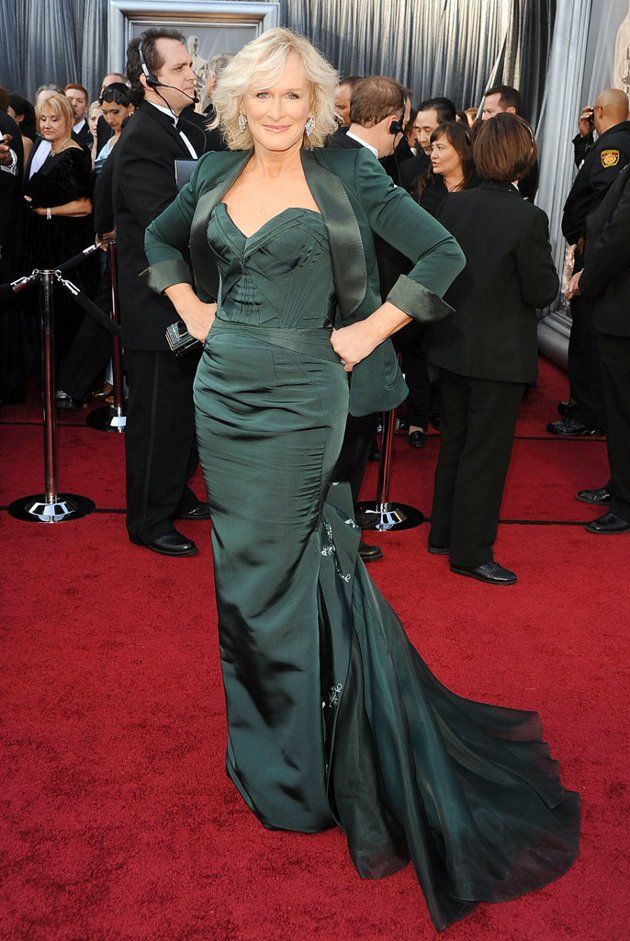 Glenn Close, about to blow this popsicle stand to go off and fight crime somewhere. And it would be a shame to mess up this dress, because the color is perfect for her, the fit is great, and I really dig the tux jacket. (The embroidered peplum might be one element more than necessary, but I am not going to be the one to tell that to Glenn Close, are you?)

And it’s not as though Glenn Close was the only person who left the house with something just a bit off about their attire. As always, there must be a division in which things were almost perfect!…but not quite.

I HAVE QUESTIONS DIVISION 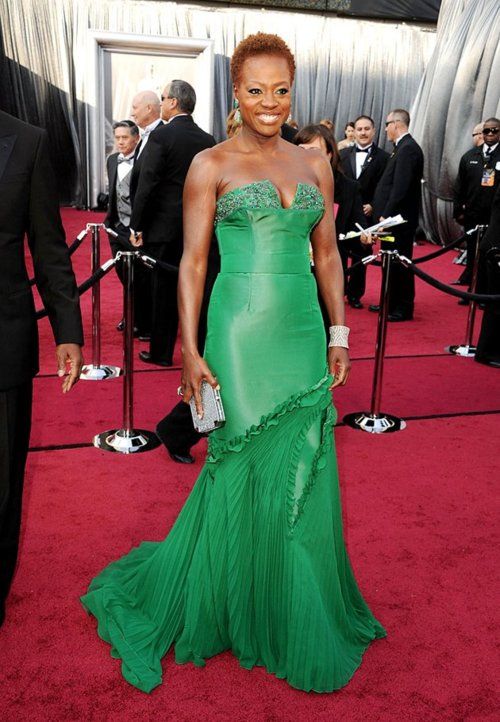 Viola Davis! Color and fit are superb, the floaty skirt works on her even though it looks ever so slightly like it’s edged in kelp, and I love the detail in the bust. (I do wish it had gone straight across the bust both for aesthetic and structural reasons, but since the scaffolding inside these dresses is often industrial grade, she probably wasn’t in any real danger.)

Apparently someone whose scaffolding was not certified:

Jennifer Lopez, in a dress that basically has DIVA embroidered throughout in diamond thread. It looks amazing when she’s standing still. According to the internet, as soon as she started moving, things changed. Which is a good lesson for everyone: always invest in 1/3 more doublesided tape than you think you’re going to need.

Sandra Bullock. I love the top of this dress SO MUCH. I do think when the top of your dress looks like that, you could cut about ten inches off that train and still look plenty dramatic. Plus, you could walk around later! (Also, full credit to whatever witchery means that her satin skirt has no wrinkles in it from sitting. It’s not unheard of that she was lying down in the back of the limo. These people play fashion to WIN.)

Berenice Bejo, in a dress that looks like it has eight million superfancy toothpicks scattered over it and that’s literally all I can see when I look at this dress. 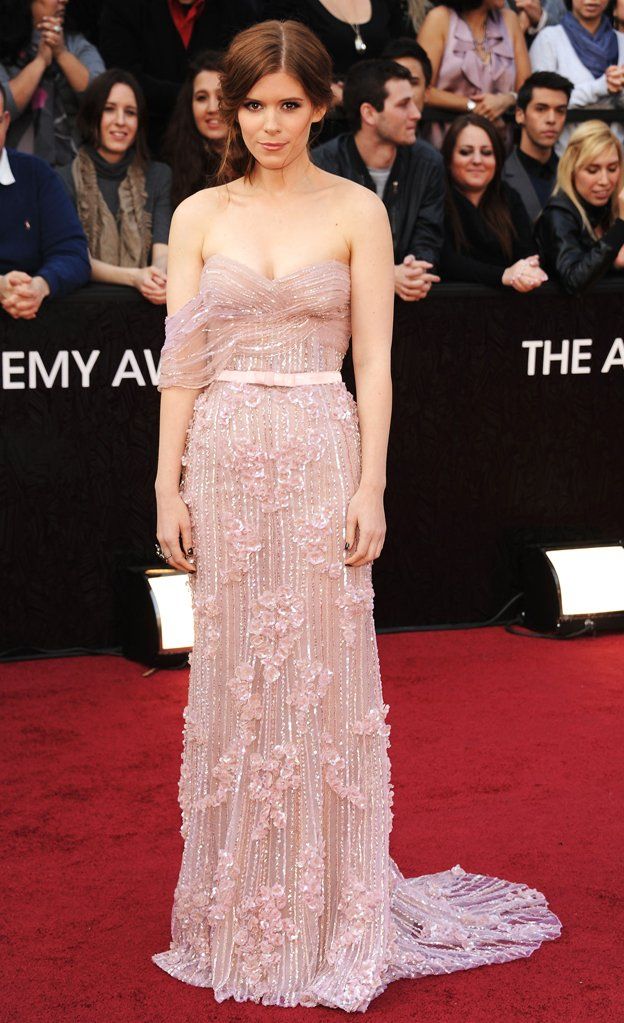 Kate Mara, told moments before this photo was taken not to stand too close to her sister so she wouldn’t accidentally end up in the shot, tries to summon a smile about a dress someone from Rooney’s camp picked out for her. 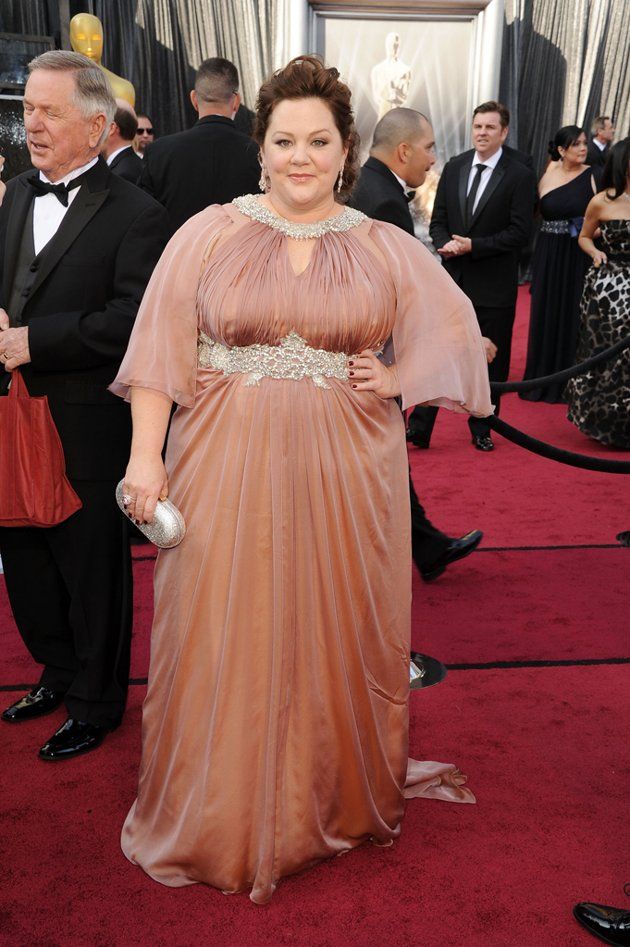 Melissa McCarthy. This is another of those dresses that probably has amazing depth of color in person but photographs too flat, and I really dislike the pattern of gathers throughout, and I wish the neckline trim had been a v-neck instead. It’s the right amount of glitz, though, and hair and makeup are bang-on.

Kristen Wiig, wearing the tulle and muslin mockup of what her dress was supposed to look like.

Busy Phillips. I know boho is Your Thing, and I actually think the dress and the earrings are both really nice, and they work all right together, and the outfit looks good right up until you hit the shoes, but judging by the look on your face, you already know it, so we’ll just let this go.

And of course, there were those who just could not possibly have been serious with this.

HAD TO BE KIDDING ME DIVISION 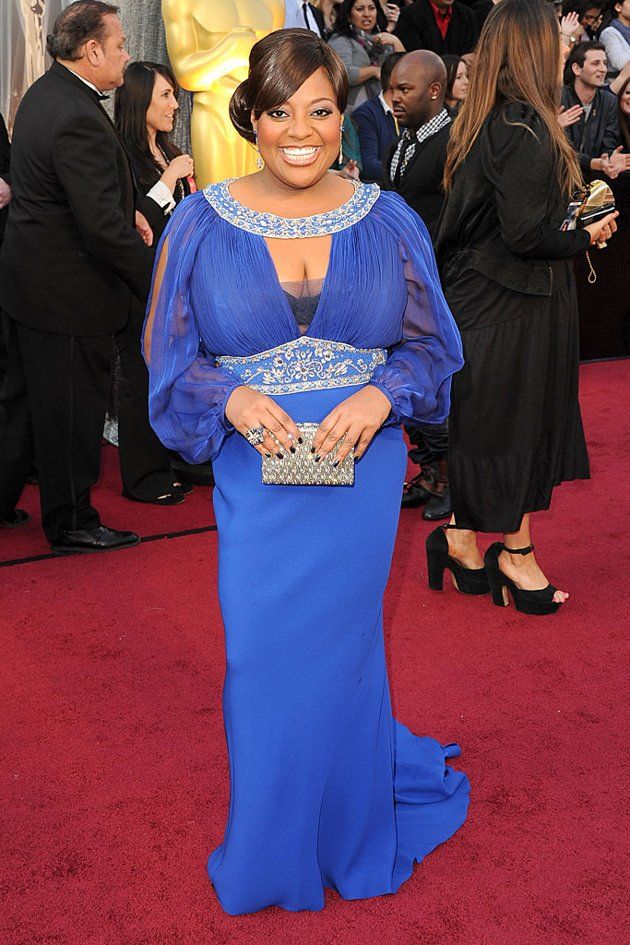 Sherri Sheperd, who trusted people about opacity when she should not have.

Gwyneth Paltrow, not quite getting how the Marvel Universe franchise has already shaped up, auditions for a role in Thor 2. (Later in the evening, she re-auditioned for her own role as Pepper Potts, and was still terrible. That’s got to be awkward.)

Natalie Portman, who does as poorly at retiring as she does with acting.

Angelina Jolie, who has a leg. (She must have been doing this shit on a dare, because otherwise she has to be kidding me. However, Jim Rash took care of this, so we’re good.)

And though the generalized attention-seeking of your Paltrows and your Jolies is hardly baffling, some things still really, really are.

Livia Giugiolli. For the BAFTAs, she wore a really beautifully-cut ladytux that was perfectly chic, so I know she knows how fit works. I’ve seen her in great, interesting outifts, so I know she can dress herself. Why she chose to go to the Academy Awards looking like an enormous 9-year-old is, therefore, entirely beyond me.

Melissa Leo. Somehow, I feel personally responsible for you thinking that if sequins are good (they are!), a sequin-tube-dress-over-a-business-casual-blouse-look is better. Where did I fail you, Melissa? Where?

Emma Stone, whose handlers told her, “If the bow is big enough, we don’t even have to WORRY about hemming it!”, and to whom she unfortunately listened.

Rooney Mara. Hair and makeup are great. Color is fine, and really, from the waist-down, I dig. However, when your bust looks like Sleepy Muppet Eyes, you have played Baffle and won.

And that’s it! I might get up the curiosity to peek at the Independent Spirit Awards, but we all know this was the trophy match. We’ll reconvene next awards season to see what people can be talked into wearing! But for now, best wishes to the stylist, designer, and celebrity assistants who have spent the last several months losing sleep (and, eventually, hanks of hair), and who can now take at least two hours off to recover. Enjoy them, assistants; you’ve earned it.

For even more dresses (and Yahoo’s repeated comments about how “aged” women look with sleeves on), check out Yahoo!, from whence these pictures came, and where the red carpet slideshow has turned into its report card.