Last night, the BAFTAs happened! Really, all that means is that this happened:

In which Meryl Streep takes the stage, loses a shoe, has Colin Firth retrieve it and slip it back on, lays one on him, and then starts her speech with, “Well, that couldn’t have gone worse,” as if that wasn’t the most amusing part of the ceremony for pretty much everyone. (Not shown: after she gives her speech – which I skipped, because I’m already trying to forget The Iron Lady ever happened, so I don’t know if it’s any good – she and Colin head backstage with Backstage Cam, and she covers her face and says, “Thank God it was you,” and my shriveled little heart grows three sizes.

I’m looking at you, Hayley Atwell:

It’s not just that this dress looks like Jefferson Memorial Middle School’s Winter Formal fell over on her, causing her original hairstyle to fall out and look like this. It’s that most of the time she’s a lovely, chic dresser, and this dress is so unexpected that I sat and looked at it for twenty seconds trying to decide if it was actually a lovely dress and I just wasn’t expecting it, but at the end of twenty seconds, the dress still looked like this, so no dice.

That might be as bad as it gets. Maybe.

There were only two divisions at the BAFTAs this year: Lovely and Baffle. Let’s not waste time.

Tilda Swinton, looking amazing as usual. Love the cut of the top and the tonal band at the bottom.

Christina Ricci, who managed to make this look Deco and not Boudoir, which is not an easy task (as we’ll see later, awkwaaaard).

Melissa George, whose amazing dress has to weigh about 15 pounds. (Worth it.)

Joanne Froggatt. For whatever reason, any time there’s a photo shoot of her it treats her like she’s a low-budget Drew Barrymore from 1993, so she’s surrounded by oversize furniture and has to wear crop tops and pigtails and hold huge daisies and shit, and it’s just not a fun time for anyone. I absolutely love this look on her, and hope that this and her brave soldiering through her dismal subplots in Season 2 of Downton Abbey mean that she’s going to start landing some more glam styling. She deserves it.

Helena Bonham Carter, being herself. It would be a Baffle except at this point I think she has that hairpiece sitting next to the front door for emergency red-carpet opportunities where she has to appear Too Quriky to Even; so really it’s just the persona she’s gone with, and she went with it here. 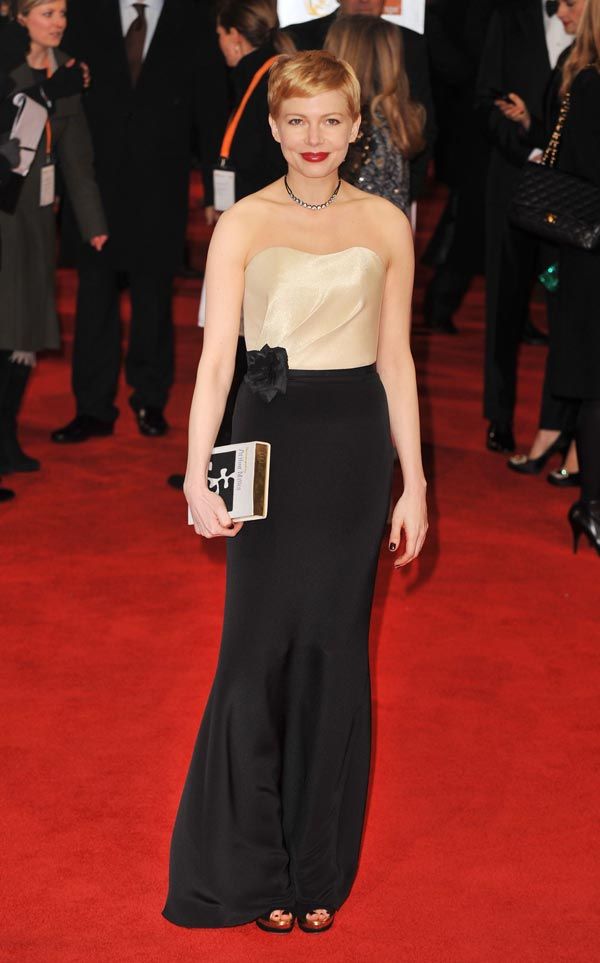 Michelle Williams! I like this on her — simple but lovely. The lipstick looks like a dare she’s regretting.

Octavia Spencer. I loved this outfit. Fit on the shirt is great, skirt volume and texture are interesting, and it defines her waist. Love the jewelry, love the hair and makeup; her best turnout so far this year, if you ask me.

There, you will be going up against all the fine competitors below, who have done their best to gain an advantage by confusing you with their outfits.

Gillian Anderson. I like the texture; I cannot get over the weird cross-section-of-old-butter colorway she went with. From the look on her face, she already knows the mistake she made.

Jessica Chastain, who must have felt super awkward when her “But maybe NOBODY looks stylish in gold lame!” excuse went out the window the second Ricci showed up.

Christina Hendricks. So, a lot of gathering and futzing can end up looking unfinished, but not if the fit on the rest of the dress is amazing. And if the fit includes strange tucks and and a four-inch puddle in front, maybe people won’t notice because of your impeccable styling, but if you look like you ran to this red carpet via South Florida, then you are Christina Hendricks in this dress.

Naomie Harris. She’s going to be in the next Bond movie! All eyes are on her, I am excited for her, she must be so nervous, etc. Funny thing: the color is great on her and her styling is eye-catching, but if you look at this dress for more than five seconds, it really does look like she got so nervous that she hyperventilated and her front side seams split open, accidentally revealing her bra, and she bravely went on the red carpet anyway because she is a Consummate Professional.

For more of the BAFTA red carpet, check out Hollywood Life and popsugar, from whence these pictures came. (Fassbender giving finger guns to the camera on popsugar cracks me up every time.)

And with that, we’re in the home stretch of this red-carpet sprint! After the Oscars, the race is pretty much run, and dozens of stylists’ assistants can finally stop counting 20-minute naps as a “full night,” which has to be fun for them.