Last night the Miss Universe pageant, which is technically Miss Universe 2014 but dithered until it became simply the 63rd Annual, began with the National Costume Contest. About six weeks from now, my latest novel, PERSONA, hits shelves. Persona is a political thriller (diplomats, assassinations, the usual), but of course one of the most fascinating aspects of statecraft is the ways it asks you to set aside your identity for something else’s sake; often you don’t get to decide, and maybe you don’t even realize until later what exactly is gone. Tomorrow I’ll show you the promo cards for Persona and talk a bit about the swimsuit competition of this contest.

But for tonight, the celebrity aspect that gets folded into Persona’s slightly sidelong world is partially influenced by behind-the-scenes glimpses of pageants like this one. Miss Universe doesn’t get as much traction in the States as you might think, but it’s gaining, and it’s already a major event elsewhere, with all the weight that goes with it. (The Guardian talks today about a selfie taken by Miss Lebanon in which Miss Israel appears, the PR problems that have followed, and the ways in which becoming anthropomorphized countries tangles the perception of the private vs. public spheres, where the idea of getting along with everyone as a pageant contestant runs right into the unofficial-ambassador aspect.) And the National Costume Contest is where some countries go all out. Some are generalized patriotic interpretive dance. Some are carnival costumes designed purely to make you wonder how they managed it. Some are more specific, or more pointed. And some, as usual, started the night before.

And that, of course, is the appeal: that healthy dose of the absurd. Another story today is about Miss Philippines, who got jam spilled on her costume as she walked through the kitchen to the stage. This brings up a lot of questions – why would you source a venue that requires women to walk through the kitchen to get to the stage when you know you’ll be dealing with costumes that have the radius of a Chrysler? Spilled on like by accident, or “spilled on” the way the Misfits were always “accidentally” screwing with Jem and the Holograms? Given how nothing really shows up in the picture,how much actual spill are we talking about? How did the judges know the joke when she expertly played it off by naming the theme fruits? How staged is all this? WHAT’S HAPPENING.

And in terms of sheer absurdity, Canada decided to take a break from vague interpretive costumes and give us a costume that was as literal as all hell.

Will it ever top the American Pacific Rim cosplay from last year? Yes, yes it will, because America forgot to honor Marie Antoinette with their jaeger, but Canada will never forget.

Honestly, though, great costume. Instantly recognizable costume from a country that rarely has those, over the top, and tongue in cheek. Canada rarely gets the knockouts, so it might as well have fun. Also, please note the weird press pit and microphone, because whoever planned this year thought it would be great to make the women say things about their costumes (they must be Drop Dead Gorgeous fans) in a venue that has no feasible press pit locations, and so we have almost no clear shots.

Venezuela, as their national tree.

Singapore, who loves her costume, which is honestly pretty damn fun, so why not!

China, taking a break from the couture of recent years with a costume I like just as much; less overtly fabulous, but I love the texture and detail.

Angola, who is selling the hell out of that dress. (The headwear sells itself.)

India, nailing it. (Apparently one of the requirements of the costume is that you have to be able to put it on with minimal assistance, which honestly sounds like this year’s biggest missed opportunity for a reality show, but if that’s the case, her look of total focus takes on another level of intensity.)

Korea, who looks like she was excited about her world-peace overlayer on her hanbok until someone said something really mean just before she went out there. It’s okay! You look good!

Japan, who I feel like is fighting for a comfortable-length skirt every year and who loses regularly, dressed for battle if battle included hot pants. Her expression says it all.

Netherlands, who honestly would have been fine if they’d just left off the sunflowers (WE GET IT, NETHERLANDS) and maybe the orange drape.

Malaysia looked a little cropped and the edges compared to the Maximum Radius Division framing we’ll get to later, but it looks amazing in this shot, so we’re putting it here. (More on this theme later, too.)

Myanmar. Misidentified in the press several times today, too, which is unfortunate, since this is plenty cool enough. 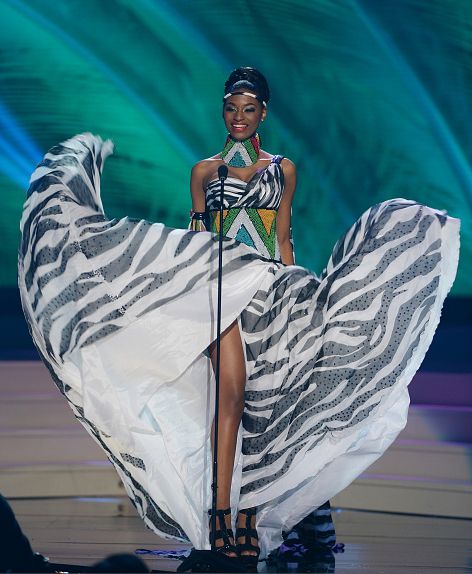 Miss South Africa, who reminds us that no detail’s too small by coming under mild scrutiny of her own for wearing a dress that had already premiered on a red carpet elsewhere.

And though there’s often commentary on culture or nationality (and some subtextual, unintentional commentary on the nature of colonialism to change what it colonizes), the most overtly political costume this year:

Ukraine, with a crown of thorns, a pretty unequivocal reference to its struggle with Russia this year. If you think that’s not pointed enough, here’s the publicity photo, which makes full use of Hunger Games visuals.

I’m so happy this division exists.

Miss Peurto Rico IS Lady Cody, wife of a rich merchant, who’s come to the court to make sure her husband gets a position in the King’s Cabinet, and won’t stop until she has her way!

Miss Turkey IS Random Party Guest, because this show is just not equipped to handle any international tensions further afield than the UK.

Miss Lebanon IS not going to settle for being an extra, and is going straight for Kenna’s job.

Miss Spain IS Princess Jessamyn, from the Grand Duchy they’ll never give more specifics about! Amid the Kenna confusion sure to ensue when Lebanon goes for it, could Princess Jessamyn have her eye on the brooding Bash?

Miss Georgia IS quite possibly wearing a dress directly from the show.

Miss France IS Marie of Guise!

(This woman who I believe is) Miss Ethiopia IS going to take the hell over, look at that dress, goddamn.

And Miss Domincan Republic IS the Virgin Mary, who will guest-star in the series finale as the perfectly made-up deity who lifts the soul of Mary Queen of Scots to eternal rest as the strum levels reach unimaginable heights.

HEAVEN MUST BE MISSING AN ANGEL DIVISION

Argentina. I love this so much – deceptively weightless and standing out from the carnival crowd with the icy color scheme, plus a parrot staff for casting spells, one presumes.

Turks and Caicos, knowing she nailed it.

Finland, who looks halfway through an a capella version of “Everybody Wants to Be a Cat” for no particular reason.

Miss Brazil, briefly uniting the world with the international language of the pee-pee dance.

Nicaragua has parrot puppets on her hands and she is fucking STOKED about it.

Guatemala, positively restrained for this division.

America, who for once actually came to play with the big kids instead of doing some embarrassing Revolutionary War getup!

Sri Lanka, dressed partially as the national flower, who apparently made her costume herself!

Germany. I laughed out loud.

Peru, who cannot believe that after lugging this whole rig downstage she still has to chat.

Ireland, who tends to either start the night before or wear weird CD capes, went Celtic Warrior this time and actually made a decent showing. Is it a total mess? Yes. Is it an ambitious mess? Also yes, and when it comes to Miss Universe, that can be more interesting. Many understated and very nice costumes were cut from my longlist; Ireland wasn’t risking that.

And Guam, who looks like she’s starring in a sitcom about a dancer who has a schlubby husband who’s always getting into shenanigans and she comes home from rehearsaland there’s four-foot high loaves of bread everywhere and she pops this pose at the end of every episode.

Kenya, who already knows all your questions and clearly doesn’t plan to answer any, being awesome.

Czech Republic, wisely leaving even before she arrives just to avoid answering any questions.

Colombia, who is desperately hoping the huge umbrella means no one will look at the flower business.

In a decent case for just shooting glamour shots of these costumes and calling it a day is Sweden, who looks adorable in the staged photo and like a half-melted candle onstage.

Don’t give us that shrug, Switzerland, you had a YEAR to prepare.

Belgium, do Maximum Radius or don’t! Halfway does nobody any good!

Curacao. Someone was afraid you would forget, so they literally stuck a sandwich board reminder on their national representative. This is what we’re all dealing with.

I swear to god, Australia is intent on giving me ulcers. They start the night before every single year, and this year’s “Aboriginal Dreamtime” theme is a bit…something. (Apparently the designer received permission from the Wurundjeri clan to use the print, which is a step in the right direction.)

Honduras, expressing my feelings about Australia’s costume. (Why did they make them talk, they must have KNOWN they’d get pictures like these, whoever arranged this year’s pageant is a sadist.)

Miss Egypt. THEY TOTALLY KNEW THEY’D GET THESE PHOTOS.

This year, partially because the pageant doesn’t care enough to have all these on the main website in a timely manner and I spent most of the day hunting for any decent photos only to be unable to match several of them with a country name, I hit Instagram looking for details, which gave me some interesting shots that in some cases were way more fun than the official ones.

Miss Aruba and, behind her, a guest who looks like she’s arriving to a murder mystery theme dinner.

Ghana, who has more personality and style than nearly anyone else onstage while she is literally standing inside a big plastic bag holding ANOTHER plastic bag with half her costume in it.

Miss Indonesia, whose costume was amazing, but who gets a new immediacy through the found-footage quality of this shot, like we’re moments away from watching her glorious transformation into a Baroque metallic bird and flying triumphantly away.

But I’ll leave you with this one, which has a weird, transfixing intensity somehow, and is by far my favorite shot of this year. This is the short of shot I looked for when I was writing Persona: the tension, the waiting, the feeling that the only thing these women are interacting with is the camera.

[The full gallery is here, for the curious.]