Miss Universe is back! It’s time for everyone involved to pretend this is a contest about various national costumes for thirty seconds until we all just admit it’s a tacky-off and settle in for a global backscatter of spangles.

After a while tracking this particular costume competition event, you start to feel the general shape of it: the undersea themers, the feather-wearers, those few brave souls who didn’t understand the memo and actually showed up in a national costume, and my secret favorites, the ones who didn’t get a memo of any kind and started their costumes the night before, and the ones who are also completely over this component and make it deliciously clear. But every year, of course, the categories are always changing, from Nonsense Capes to You Have to Be Kidding Me to some new ones emerging only this year. All of them are amazing.

Otherwise known as why we’re here, why they’re here, why Nonsense Capes are made, and why bedazzlers get out of bed in the morning.

Belgium, who took a break from lace umbrellas this year, for some reason I’d honestly like to have known the decision process behind.

Indonesia, and what looks like a hand puppet, don’t tell me if it’s not, I want to keep my dream.

USA, a model of restraint as per usual. (“COME ON MAKO, THIS NATIONAL COSTUME CONTEST IS FOR REAL.”)

Haiti, totally fucking nailing the Nonsense Cape that stymies many.

Switzerland, just thrilled to be in something besides a milkmaid costume.

Puerto Rico, who has actually nailed the Under the Sea theme that so often goes wrong, and so has earned that face of smug relief.

Trinidad and Tobago, symbolizing the duality at war in the heart of every one of us.

Venezuela. I know very little about the Miss Universe pageant, but everything I have read indicates that Miss Universe is a group of women who gather for a pageant, and a human shark in the shape of Venezuela who has been carefully trained since childhood to do only two things: walk on land and win this pageant. They have never come out in a costume that looks like it costs less than ten grand. They are not starting this year.

And just in case the sleeves didn’t make enough of an impact, they added an eight foot train

It is worth noting, in terms of things that go in and out of vogue on the pageant circuit, the trend away from the filmy nonsense capes of yore. Instead, the kicky accessory that’s always been used to indicate “I don’t really care about winning this part” went mainstream!

British Virgin Islands knows we don’t want this; she didn’t either.

Germany, who has so much going on that somehow the weirdly enthusiastic military salute becomes the least of her problems.

New Zealand, who wisely shifted them over her shoulder at the last second. Innovation is key in Miss Universe!

Aruba, who tried to make her armpit beads a little more modest by giving them some fringe to hide behind.

El Salvador. Get it together, El Salvador, holy shit, you’re going to take someone’s eye out.

Every so often this year, the costume teams from Miss Universe looked up from their various workplaces and knew, as if in a dream, what they had to finally admit in their hearts they wanted to do moret han anything else in the world: join the wardrobe department from Reign.

Italy, as the Italian princess who arrives in the French court to seal an alliance with Francis. Will she succeed…or will someone be POISONED?

Ukraine, as Lady Marissa, newest handmaiden to the queen, assigned to her by Queen Catherine…but why?

Serbia, in an outfit I’m pretty sure Mary Queen of Scots has already actually worn.

Poland as Janet, a mysterious noblewoman at court who seems to know more about Mary’s deepest fears than seems possible. Are they connected to each other…or is Janet an enemy worse than Mary could ever imagine?

Sweden, as England’s Princess Elizabeth. What are her intentions toward Mary? Does she carry with her the banner of freedom…OR POISON?

Turkey, as the visiting Pope.

Occasionally, as if by mistake, a contestant wanders out in an outfit that is actually informed by the idea of a national cotume.

Japan, in a load-bearing kimono. 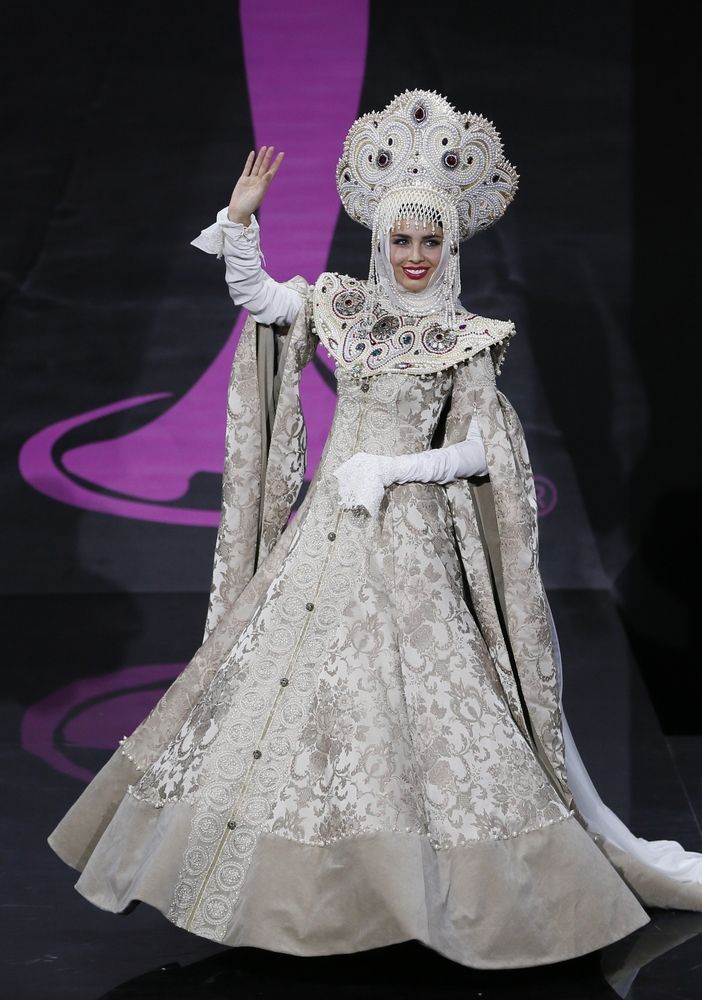 Of course, not everyone had time to think about nonsense like actually reflecting their national costume. Sometimes a contestant just wakes up in the middle of the night, curses prodigiously, and gets to work frantically before her 9am call.

STARTED THE NIGHT BEFORE DIVISION

Spain’s national costume is sponsored by Big Tex’s Fringe Emporium: The Fringe You Need, When You Need It.

France, are you kidding me.

Why Greece ever shows up in anything but a sparkly chiton is totally beyond me.

Croatia pulled an all-nighter; only twenty minutes of that was spent on her costume, the rest was just catching up on 30 Rock.

Mauritius, who decided if she carried an umbrella nobody would notice the rest.

Finland. Finland, an Alyce Prom designs from 2007 doesn’t count as a national costume. You are disqualified.

And every year, we get some amazing faces from contestants who have seriously just had it up to here with this shit. They might be my favorites of all.

Azerbaijan, who already knows, okay, you don’t have to say anything to Miss Azerbaijan, she is on top of it.

India, who I was told won the Miss Hostage Eyes superlative: well-deserved.

Tanzania, who is too cool for this. She’s too cool for everything. After this she’s going to do something that’s actually fun. Have a great time, Tanzania.

Guatemala, who has just this second remembered the adage about taking one accessory off before you leave the house.

But this year’s award for the picture that made me laugh the most, for every possible reason: Denmark.

Congratulations, Denmark. I think you can agree we’re all winners here.