Last night, the murky power plays of the fashion world and the transparent power plays of the film and television world came together for the Met’s Costume Institute Gala, a single gloriously awkward night of designer patronage in every sense of the word. This year’s honoree was Charles James, perhaps the master of midcentury American formalwear.

Unsurprisingly, the dress code meant this was a red carpet filled with references to his work, which was overall a lot easier for most people to handle than last year, when the Costume Institute announced “punk couture” like it was a fart in an elevator and then ran away cackling. (Weirdly, the history of this particular red carpet suggests the more focused the exhibit, the easier it is to dress to theme.) It helps that Charles James was as adept with a striking pencil-skirt cocktail dress or slinky draped silk as he was at a showstopper ballgown, which means everyone could more or less please themselves and probably still be nodding at James somehow.

This event has gotten bigger in the public eye since I first became aware of it, which means that 1) instead of being a fashion industry insider’s turf with rarefied appearances by TV and movie people deemed appropriate, it’s now a venue crowded with film and TV people, so the politics have gotten even stickier, and 2) the red carpet has ballooned. I had to cut a lot; otherwise we would be here all day.

But first, a look at a shot taken in advance of the event, which pretty much sums up what I suspect the Costume Institute was hoping to evoke:

A new generation of young, effortlessly poised young ladies in the Charles James mold, with a modern twist – more casual (stylishness and perceived carelessness are increasingly synonymous), more dynamic – but still with that particular way of inhabiting clothes that’s hard to quantify but has been the making of so many.

The sense of casualness is key to what the event is now. (Karlie Kloss and Taylor Swift even took an Instagram of themselves touching their lips with lipstick as if making last minute touch-ups…but come on, like any makeup artist is going to let them near their own faces for an event like this.) This is the inner sanctum of the Stylist Guild we sometimes talk about on Red Carpet Rundowns; nothing here is careless or left to chance. This event is as carefully designed, buttressed, and polished, as the first Charles James picture; the trick is in making it look are careless as the second.

With that in mind, some of the highlights and lowlights of the night.

Charles James mastered them (the photo, if it works, shows the layered tulle in the Butterfly dress to achieve the smokiness of color). Last night proved what an impact they still have, and how hard they are to master. (They also made me wonder if any of this had been taken into account during the event-planning stage when they were setting tables. You can’t sit ten people at a table with gowns like these in standard-size event chairs! DID THEY PLAN FOR THIS? They probably planned for this.) 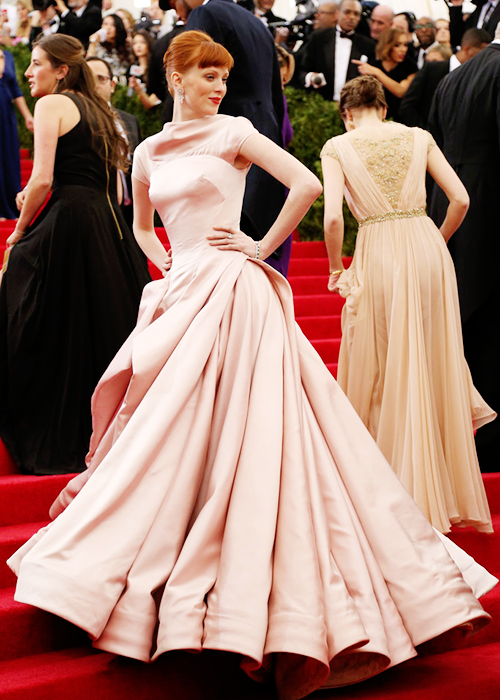 When I saw this photo of Karen Elson I said “Nailed it” out loud to my computer; it’s a hairsbreadth away from a living reenactment of the James photo, tweaked just enough to define it as more modern. Plus you can’t ask for a better shot than this.

Bee Shaffer, who’s spent years in trailing ballgowns no matter what the event was, smiling the smile of the vindicated.

Maggie Q, amazing. (Though I wish they’d left off the necklace and risk the dress looking severe. It’s Maggie Q, she can do severe, let it ride.)

Karlie Kloss, proving why she is a professional wearer of clothes. 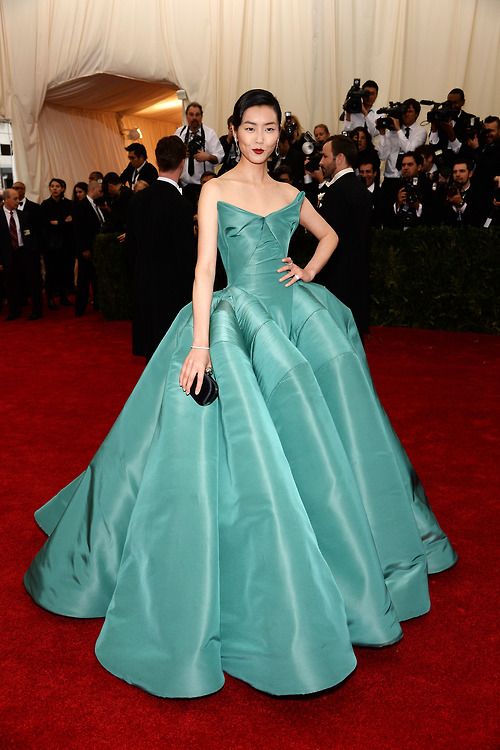 Karolina Kurkova, here to poke the chins of every other professional wearer of clothes.

Emmy Rossum, in a smart choice. (I’m a tough sell on florals always, but the colors are fresh enough to offset the granny’s-couch aspect.) She’s proved she’s sexy on Shameless; this dress screams elegant romance, which is a good angle, and also proves she can carry off a statement dress, which will work out well for her on future red carpets.

Meanwhile, this dress came to the event wearing Katie Holmes.

Rita Ora. I could really live without the shoes and the wrist wrap, but sometimes you just gotta get noticed, I guess. (The dress reminds me of a muslin, and therefore gets a pass even if that wasn’t what was intended.)

Zoe Saldana. Charles James did, in fact, have a balloon silhouette! However, it was not his best look even with a long sleeve to balance the shape; this looks like she had to cinch it with a zip tie so she wouldn’t step on it.

Hailee Steinfeld, in a very sleek take on his ballgown colorblocking.

Dita von Teese, born for this moment, and Zac Posen, in his most formal wizard robes.

Mary-Kate and Ashley Olsen, who didn’t arrive with their sister Elizabeth. Their evening coats might not have acknowledged Elizabeth all night. Those brass buttons never turned away from the sister they’re contractually-entwined with, forever and ever.

Kate Mara’s dress looks vaguely like a brackish swamp. I’m actually not opposed to that. (I’m a little opposed to the hair; it’s Charles James night, put the beach hair away.)

Taylor Swift, who as usual is in a lovely dress I wish someone else was wearing, with that forcible whimsyface that never dropped the entire way up a red carpet that takes at least five minutes, so points for stamina at least.

Dree Hemingway, professional clothes wearer. Behind this outfit, a designer who smartly interpreted Charles James suits instead of ballgowns and came up with this slightly tweedy-looking cocktail dress. Tonight, other professional clothes-wearers, Dree takes up but one chair.

Amy Adams, opting for the general silhouette but leaving the crinoline skirts at home.

Diane Kruger, on point but true to her personal style as per usual. Lovely.

Anna Wintour burns the memo every fucking year, and her glee in doing so has become something I look forward to. Her graffitied- garden-party would have been perfectly on trend for last year’s punk exhibit, which I promise you is the reason she’s showing up in it now.

Janelle Monae, here to do battle with Zac Posen.

Kirsten Dunst, who Did the Thing, and is goddamn proud of it. 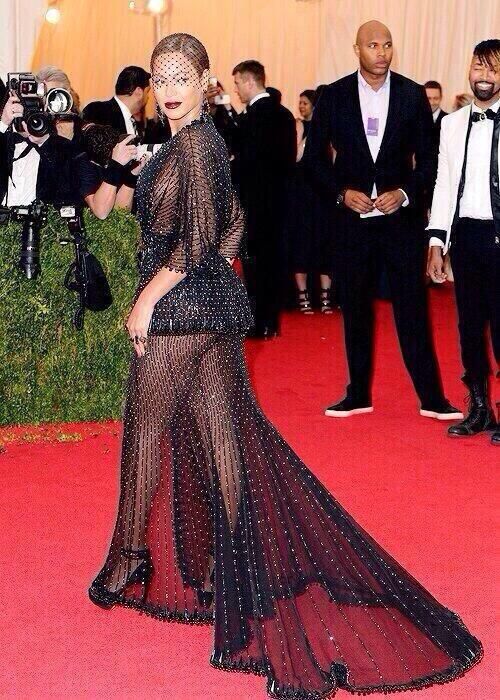 Beyonce, who has now established the tradition of arriving last in something it takes three people to adjust, and feeling juuust fine about it.

Sarah Paulson. I dig the top half of this dress on her; I grudgingly accept the bottom half, even though the very cool hip spray of shine quickly becomes a craft project as it falls.

Brie Larson. As formalwear, this is a bold move. As Charles James tribute, forget it.As Bjork cosplay from a never-recorded concept album about a magical fish? Proceed. 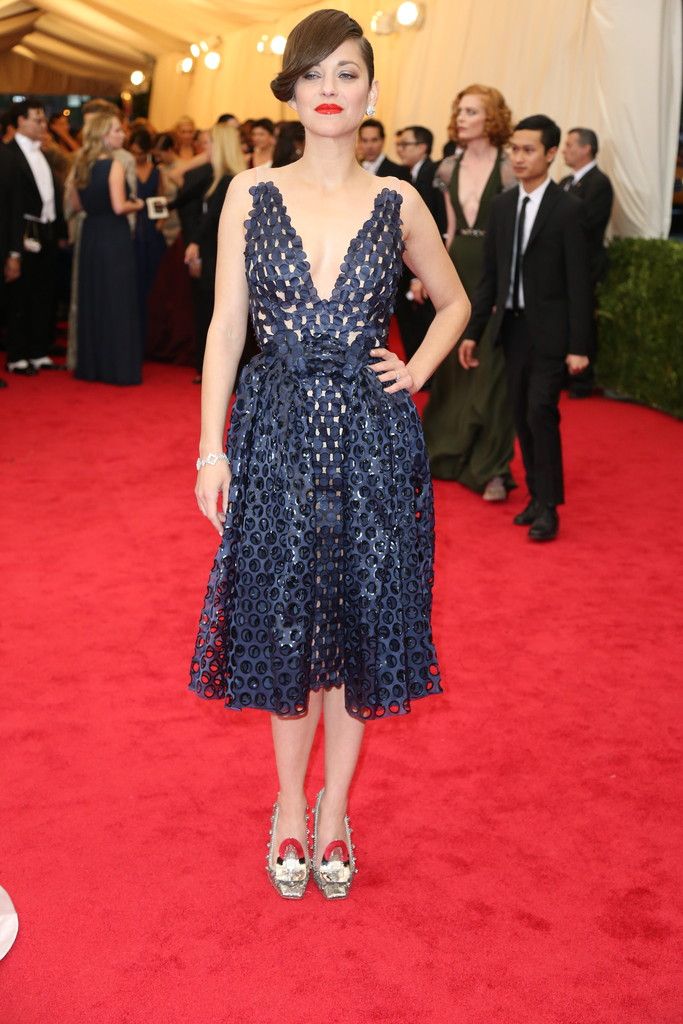 Marion Cotillard, who wears ballgowns the way some other actresses wear pajamas, opting to wear a garbage-bag dress instead, with flawless modern-Charles-James makeup just to prove she can do what she wants.

Kristen Wiig. I adore this. Sleek, minimal, considered, with a peplum that turns into a sequin-loaded suggestion of a tux-tail that also looks like mating-bird plumage or a satellite dish, depending? I’m in.

“Midriff is in,” they told her. “Sleek, with a hint of midriff and a huge leg slit, that’s the way for an actress trying to get back to her romantic image to go on a ballroom-themed red carpet.” Anne Hathaway knows she should not have listened.

Leighton Meester. Blair deserved better than Chuck by the end of that mess of a series; you deserve better than this Coachella formal business. A well-deployed ballgown at an event like this could have done for you what it’s doing for Emmy Rossum. Fire whoever told you to wear this. 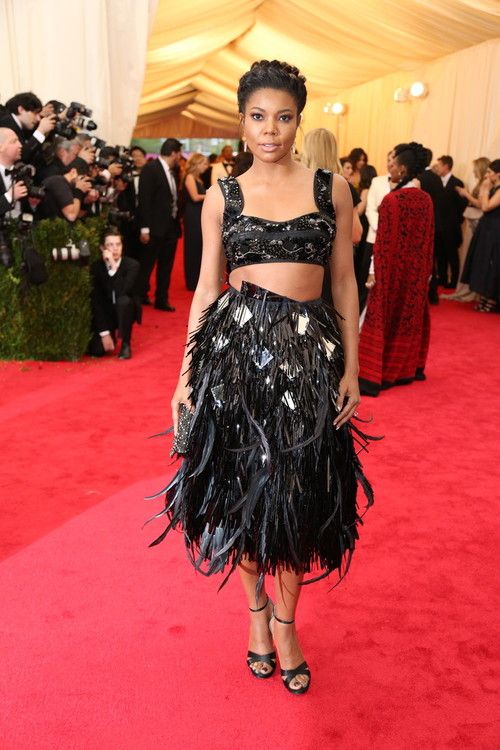 Gabrielle Union, who also went for the flapper idea, wearing something that looks like a Project Runway contestant’s interpretation of The Flapper Idea.

Greta Gerwig. A good example of a dress that would be pretty savaged at, say, the Golden Globes, but relatively well-received at the Met Gala. Also an interesting reminder that even a good actress does not a professional wearer of clothes make; most of us, in this level of clothing and this level of scrutiny, would have something of this look about us.

Chanel Iman, wearing a stunning Deco dress that I have to mention because I’m not made of stone.

Shailene Woodley, wearing a physical representation of her confusion about what “feminist” means, and carrying it off with about the same panache.

Cara Delivingne, proving that just because one is a professional wearer of clothes doesn’t mean one always hits the mark. (This, I suspect, was the mark.)

Tabitha Simmons, regretting everything about this dress it is possible to regret. 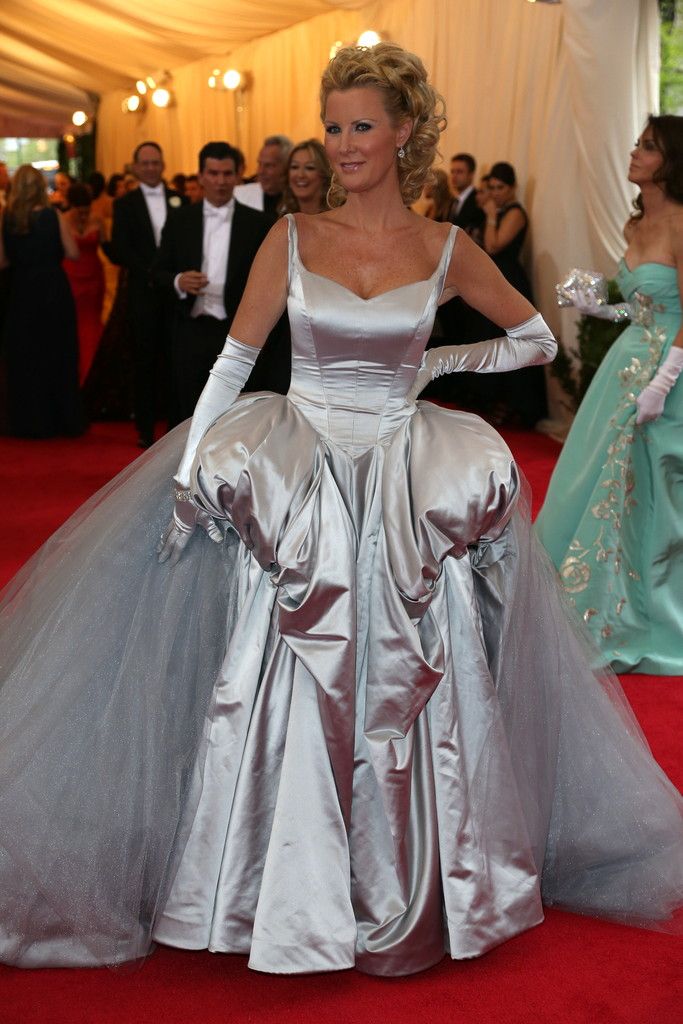 Sandra Lee. I just need this here. (Is it mean that the lady behind her is openly laughing at her dress? Probably. Still, great moment, and honestly, fair cop to the lady laughing.)

Sarah Jessica Parker, in a dress that from the front was a pitch-perfect rendition of the “Petals” gown, and from the back was a huge trellis on which Oscar de la Renta stamped his name so you’d never forget who had the idea to insert an autographed trellis into a Charles James.

Maggie Gyllenhaal. There was a time I despaired over her seeming inability to dress herself. Now I understand it’s just her shtick; she picks things that will wear her, gets her free champagne, and goes home. If she looks like the empress of the Disco Planet, that’s her own business, I guess.

Oh, you need Kristen Stewart to wear a designer dress to an event? Fine, she can obey the letter of the law. She will be there, dressed in clothing designed by a famous person. Can’t ding her for that! DONE BYE.

Lea Michele, reminding us how hard it is to look effortless.

This picture is included only because of the dawning horror on Kanye’s face as he looks down; several people allowed Kim to leave the house in this dress, and there’s nothing anyone can do about it now.

Oh, you smile now, Chloe Moretz, but be careful. Today’s winsome rule-breaker, if she makes poor decisions, does not become Kirsten Dunst, flinging rules aside and looking fabulous doing it; she becomes Chloe Sevigny, apparently doomed by her personal brand to wear quirky-ugly clothes for the rest of her life.

And Kate Upton, who you could just HEAR being disinvited from next year as soon as she showed up, making the most of the one shot she knew she would get. She had a dream of Shady Dame from Seville cosplay. Dream: lived.